Roger Mooking has earned an international reputation as one of North America's premier Chefs. His globally inspired culinary style is influenced by his culturally rich and diverse background. As a Trinidadian-born, Canadian-raised Chef, he is no stranger to fusing his various influences to create new and exciting culinary adventures.

Over the years, this third generation restaurateur has co-owned and consulted on many food and beverage operations, accumulating many accolades along the way. "Twist by Roger Mooking", is a restaurant that showcases his love of global flavors and ingredients with locally sourced North American comfort food. 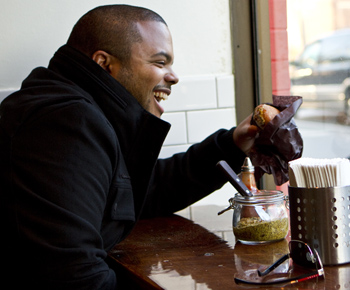 Chef Mooking is the host of Everyday Exotic. His award-winning cookbook, based on the show, explores pairing ingredients from all corners of the globe with everyday meals. He is the host of Man Fire Food and Heat Seekers airing on Cooking Channel and Food Network respectively. Roger is a reoccurring judge on Chopped Canada. His talents have led to appearances throughout Asia, North America, the Caribbean & Latin America and include features on The Today Show, Good Morning America, Top Chef Canada, Guys Grocery Games, Iron Chef and Chopped as a guest judge and winner of the All-Star Chopped celebrity chef episode.

Taking his talents outside of the kitchen, this Juno award winning recording artist catered the 2016 Juno Awards Gala serving up his signature Mooking dishes to the best in the Canadian music scene. According to Roger "food feeds the body, music feeds the soul".
Visit RogerMooking.com